Yes it's the Greg Meyer column, now with pictures at no extra cost. Today he focuses on another of our stars with very little, if any, mention of 'you know who'. He who cannot be named but whose name is on all our lips and in all our thoughts, Well mine and Gregs and the regulars at 'a Kent pub' anyway.
Meanwile the Invisible Man goes unnoticed and the Forgotten Man is remembered. The Third Man cannot be named but he sneaks into one of the photo's anyway.
.
.
The Forgotten Man .. The Invisible Man .. and The Unmentionable Man.
.
.
Just lately it's become a little monotonous in all the media. Seems we only have one player at Spurs. Seems as though the Sky will fall in if he goes. News of the World already has. Apologies to cyclist Bradley Wiggins of Sky Racing. He did fall and is out of Le Tour. At least our second and third bets are still on. Come on Mark and Cadel.
.
.
But impending and erupting volcanoes with attendant ash clouds aside, our non smokers pub is now resigned to letting the volcanoe explode. If the unmentioned player goes for the lure of Lucre then so be it. So long as the lucre is astronomical then perhaps the message will not cause our other stars to have second thoughts.
.
.
Our lawyer and basically our pub in entirety say refuse all overtures. Enuff said and looking at a glass half full as always surely our collective occupiers of bar stools reckon somewhere in all this we have an extraordinary squad and none more so than  ...
.
.
The Forgotten Man.... A Work of Vaart.
.
.
Rafael Ferdinand van der Vaart born 11 Febuary 1983 ... save you the arithmetic, he's 28 years young.
.
.
His early years were spent swerving footballs from the lounge to the kitchen. No mean feat in a caravan.His parents patience finally gave out and at age 10 he was shipped off to the famous Ajax Football Academy. He matriculated with his good mate Wesley Sneijder( another kent pub favourite) and the rest is history. Hamburg, Real Madrid and then The Lane.
.
.
Without being exhaustive our pub have some fond reflections on our very classy Dutch son starting with his own son ... the early years ... 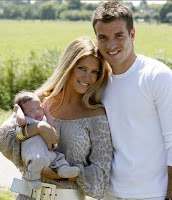 a proud father and the delightful Sylvie with Damien who arrived in May 2006
.
.
That was during his Hamburg years which after the move to Real in 2008 culminated in the Levy signing at 4'oclock on 31 August 2010. Well done Daniel. Again it was Daniel who stitched up the unmentionable to the 6 year contract very recently. Our banker is still not convinced that Harry is with it in the big signings as opposed to the smaller used car signings. We hope this myth is well and truly shattered shortly in the transfer window. Before mention of that hard to see man back to Rafa and some photographic proof of his contentment with the Lane ... 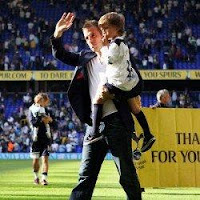 He has put on weight, Damien that is.
.
.
Rafa is back and with a full pre season our pub reckon he will rise to greater heights.
.
.
Given his star status the press have done just that with Rafa as regards the unmentionable man, press that is. Maintaining perfect dutch poise and diplomacy perhaps his reaction can best be summed up as .. 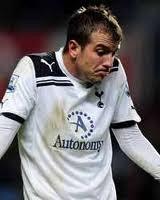 Again Mine host and the happy regulars are not dwelling on half glasses. Spurs are in the big league. If not why are a London rival after one of our best. Yes we need some fire power. More on that in a minute. Look if we stand firm, keep what we have and add what we all know we need then Rafa , Aaron, Gareth, Jermaine(?), and the unmentionable one , yes thats him enveloped with Spurs joy in the background plus all Spurs  will certainly challenge for top four and then some. 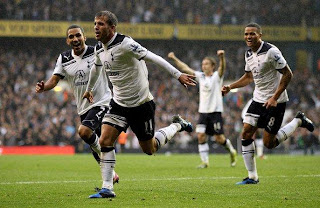 So cheers to the Van der Vart family from the Kent pub family.
.
.
The Invisible Man.
.
.
We won't dwell too much on this subject given the invisible happenings so far. No news is normally good news. Try that on at our pub and you may well die the death of a thousand beer coasters.
.
.

The invisible twenty goal man has yet to appear swathed in bandages and sun glasses. Thats how H. G. Wells famous film began. Later the said man ran amok.
.
.
It's a scenario our gardener would be quite happy with. Running amok with goals galore is what we need.
.
.
Rossi, Vucinic, Llorete and Damio are doing the tabloidal rounds. Even Jay Boothroyd has twittered in.
.
.
Some defining moments coming up. No invisible man then the likelihood of the Unmentionable moving on next year is certain. And who would blame him. Certainly none here ...
.
.
At A Kent Pub.
.
.
Great to see some happy photos of the Bentleys, BMW's, Range Rovers etc back at Chigwell Lodge for pre season. The drivers also looked happy. No sign of a Croation Skoda but then he was in a meeting and yet to take to the track.
.
.

Trying times still. How you manage a possible title challenger and a tricky Court case all in the same month is debateable. Bet he'd much rather a leisurely stroll round South Africa with no committments.
.
.
Our thoughts are with him. Certainly our lawyer has fingers crossed for Harry.
.
.
Cheers ... forget the defining moment and reflect on our own work of Vaart ... Greg Meyer.     coys.
Posted by JimmyG2 at 22:07

JimmyG2, no offence intended, but I can't get on with any of this Kent pub business, and I nearly missed your last blog entry because of it.

Regarding the last blog, it's strange how so many go on the offensive when you even hint that Levy might not be quite the man some appear to think.

It would also seem that these same people, pro or anti Stratford, ignore the fact that he was more than prepared to move to the OS without proper fan consultation and without fully exploring every avenue that would make the NDP 'viable'.

I wonder if they'll still feel the same when Modric is inevitably sold. It would be great to see a chairman of another club actually make a player 'rot' on the bench, but to think a chairman who knows the price of everything but the value of nothing will be that man is incredible.