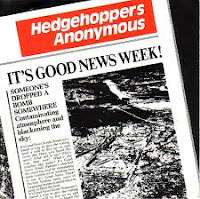 The good news is that there isn't any bad news
We started the window in the belief that 'no news is good news' but now that the Modric and Harry sagas have stalled we are beginning to change our attitude.
The bad news though is that there is no actual good news. All our best players are still with us; but so are all our not so best players too.
On the premise that bad news travels faster then the absence of reports could well be a good thing. However newspapers like nature abhor a vacuum especially during transfer windows and the phrase 'you couldn’t make it up' clearly does not apply to the sports pages, or to fan sites and blogs. Not to this one obviously.
But as Mark Twain said, If you don't read the newspaper, you are uninformed: if you do read the newspaper, you are misinformed'.


Sports Report
However if you weigh up all the actual news then the balance is beginning to dip in our favour. Van Der Vaart made headline news in S.Africa scoring three times, two of them good strikes from free kicks. We won the trophy in a somewhat rigged tournament and like all good teams, allegedly, won the final game without really extending ourselves or playing consistently well.
.Defoe even scored a decent goal and Gomes confirmed that he was our best keeper. Rose continues to impress and Walker confirmed that he might be the next youngster to step up. That’s if Harry Kane doesn't make it to 4th striker. If they're good enough they're old enough in my view.
Elsewhere Kranjcar, Pavlyuchenko and Townsend made their marks and the squad even though not upgraded at the time of going to press is looking more than respectable. Our pre-season schedule is looking a bit thin but any kind of success is useful for squad morale and confidence
Hot news
On other news fronts we can begin to cross off some of our 'targets'. Let's start with the 'A's' . Hot off the press is the news that Aguerro has signed for City for £38 million and rising and Adebeyor wants £170.000 per week. So that's two down, some 300 to go.
Defoe doesn't fancy the Toon, but then what's the point of taking no goals to Newcastle.
Vucinic is still on the point of joining us for around £15 million. but as he begins with the letter 'V' it will take quite a long time before I get round to him. He might have signed before I do.
Court report
The judge in the Harry trial is ill and the hearing postponed until September. More delay; more time for speculation; more uncertainty, more papers to sell.
ITK
As you may know JimmyG2 is not a big fan of the endless witterings of the world of ITK. However Spurs Musings is pleased to announce that the American humourist Will Rogers who died in 1936 has been appointed our chief ITK correspondent on the strength of his comment, 'I only know what I read in the papers'.
He is more famous for the remark 'When in a hole stop digging' and is well worth looking up.
I'm sure you join with me in wishing him well in his new role as our roving ambassador of inside speculation.
His comment that 'Politics has got so expensive that it takes lots of money to even get beat with.' could just as easily be applied to the Premiership.

I was so happy to see Kranny score that screamer! Why does my gut tell me that we will be seeing him score a couple of those during the season?

Yes but not for Spurs unfortunately.