Lloris and Lamela: a love affair.

From Hugo, your secret admirer.
Doh!
.
The Greg Meyer Column.
.


When Hugo met Marine and Erik met Sofia there was and still is love in the air. Another love affair involving a 20 year old Spurs fan and her football hero is also still aloft.
.
Mind it came under serious threat on Sunday 29 December 2013, the day Spurs played Stoke at the Lane.That was also the last Premier game that our pub's football love interest and Argentine hero played.
.


More on the Lloris love affair in a moment . Firstly to our exciting 22 year old forward be it wing or central.
.


Our pub's love affair was born after watching those amazing skills on the now famous Roma Compilation You Tube clip. It continued and was confirmed after his extraordinary skills against Sheriff at the Lane.
.
Alas after that with AVB ruling out an appearance against Newcastle it all went downhill from there culminating in a debilitating back injury. Why?
.


Speaking from a well known pizza establishment in Notting Hill yesterday evening Franco Baldini was polite enought to share some thoughts with a renowned Spurs fan.
.
The upshot was that he believes Lamela will have a great season and that last year "they" ruined him. Franco opined he was very young, shy,and in a new country.
.
Mishandled perhaps. Elaborating he said that he is surprised when Lamela does not score in games. He is that good.
.


Good enough for Franco then good enough for our pub. Certainly has a logic about it, the aspect of not settling quickly etc. With a fellow Argentine now managing, new curtains in the house and he and Sofia still madly in love it bodes well.
.
Not sure he is still doing the English lessons. Who cares. What matters is the timing could not be better given our pub's dilemma over ...
.


Where Are The Goals To Come From.
.


Soldado is a lovely bloke, nice touches, no pace, loyal and determined but unless it is a penalty the output thus far is hardly prolific. Harry Kane as per Soldado, ditto. So we are left with an actual enigma and some might say a coming enigma.
.


If Adebayor is motivated, not always the case 2 seasons in a row, and the Lamela revival continues apace then no worries. Throw in a certain Christian Eriksen and the picture brightens.
.
Hardly the riches of Chelsea but take heart, Arsenal still have Giroud plus 23 million midfielders.
.


Yes weeks to go regards the window I hear you cry. A myriad of names linked. We'll see. I guess whilst scoring is vital we do seem to be looking better down back. Davies, Vertonghen signing on for 5 years, and perhaps a fit Kaboul.
.
Not all doom and gloom and of course back further we have one of the world's best goalkeepers. Captain of France and a great heartthrob for a football mad, make that Spurs mad, impressionable 20 year female fan of the suave and handsome Gallic goalie. Still a fan despite of and indeed because of that memorable Sunday in December.
.


As we board the train at Orpington ( little do I realise the importance of the London-Orpington leg ), part way through the journey to the Lane, I casually mention that Hugo is very happily married to the lovely Marine and they are blessed with the 2 young daughters Anna-Rose and Giuliana.
.
Completely undeterred, water off a duck's back, the 20 year old reminds me of our main mission today. Hugo features as front cover pin up boy on the Spurs Official programme.
.


We walk to the ground from White Hart Station passing the usual program sellers. Don't worry I say, we'll get one inside the ground. The Official Spurs programme does not rate highly with me.
.
Official club speak generally filled with sugar coated floss. Harsh perhaps, there for the irregular goer so as to acquaint himself with numbers and names on the pitch. Ah thank ghod for the irregular goer and especially those that ply the London-Orpington leg.
.


Spurs romp home 3-0, Paulinho shows some real Samba and dare we think it , appears to be settling . Alas that thug, Charlie Adams, takes him out.  Out for 4 weeks thereafter. The jury too is still out on Paulinho.
.
Our man Erik comes on in a cameo but the body language at the death does not bode well. He is in possession at the very end and kicks the ball away in very frustrated fashion. A portent of things to come.
.


Forgot to try for a programme within the ground but no worries plenty left on the street. Sold out is the continuing cry. Oh well let's just pop into the Mega store. Oops no go. The little mega store. Sold Out. How many impressionable 20 year old female fans does Hugo have?
.


Training back into London and I assure an increasingly distraught 20 year old that we'll be able to get one online. No I don't believe it either. So all aboard the London-Orpington leg.
.
Ten minutes into a very quiet journey, what can I say, the football ghods raise their avuncular heads. Spotted on the other side of our carriage two 50'ish gentleman in deep conversation about a certain Spurs vs Stoke game.
.
And yes poking out of a jacket top of one of the said gentleman, a certain grinning Gallic goalkeeper.
.


Why don't you just pop over and ask whether they might be interested in selling it I say. Me the one who caused this mess now saying you go. Unfair yes. Still the pull of Gallic hero worship proves irresistable.
.
Our 20 year old politely enquires as to whether the two gents went to the Lane.
.


Turns out one is a Millwall season ticket holder but his mate is an irregular Spurs attendee. The subject of the programme is raised. Delighted. Here you take. No way will we accept payment.
.


A very, very happy member of the Hugo Lloris Appreciation Society gleefully accepts the heaven sent offer. See there is a football ghod. The programme still sits in pride of place upon a lounge room mantlepiece.
.


The  recent news that the said Monsieur Suave is with us for another 5 years means it will probably have a companion very soon. Yes and this time the first programme seller out of the blocks will find a very willing buyer.
.


Summer despite the lack of Spurs does have its upside. Sunday sessions in the Beergarden dreaming of glories to come, accompanied perhaps fueled by fine English ale are a happy affair.
.


Our pub like the new man, like his philosophy, like the fact that the players like him. No major losses, some useful ins, and indeed with Hugo Lloris and Erik Lamela it means our love affair with Tottenham Hotspur is looking good.


Cheers ... being greedy 2 more in would be nice ... Greg Meyer.    coys.
.
Jimmy's Video Spot:
Would the 2 more be Schneiderlin and Rodriguez Greg? Just a whisper.
.
Here's the highlights of the Tour just ended. Nice pair from Erik, Soldado amongst the assists and a penalty of course. Kane set up Holtby for the pick of the goals and Holtby returned the favour. Townsend scored a winning scorcher, and Azza's wasn't bad.

.
We were without our World Cup 'stars' but the opposition was second rate at best.
But the flag was shown in the land of milk and money.
Posted by JimmyG2 at 22:15 No comments: 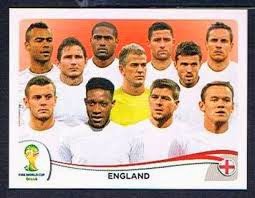 'E' is for England.
What about a couple of these Mr. Levy?
.
The Jimmy G2 Column.
.
Well it's come round again. That magical moment when the lads return; pre-season is imminent; TV fixtures are out; the cockerel's had a lick of paint and the new manager is leafing through his Panini collection with Levy on fast dial.

As I speak no-one has actually left though some are being shown the door and as yet no-one's come in.  Daws is gambling that he called it right last season by refusing to go. In the event he became a key player by default. De fault of injuries mainly.

I lived in Hull for several years and it's not that bad Michael. Honest. Bit part player at Spurs or key man at Hull. Tough decision but it's worth a punt staying with us.

At Musings we like the boy for his spirit, loyalty, attitude and many other things that make a club and a player other than pure football ability. Not the best certainly but it's a close run thing between him and Vertonghen in my view. And Jan may be seduced elsewhere in any case.

Amazing how the surly Belgian gets such rave reviews and Smiler Dawson is barely given the time of day by most fans. Both are pretty slow and gave a similar number of goals away through errors but I know who I'd like to be roped to half way up Everest.

Perhaps Poch. could do with a bit of willingness and stability in the squad. Replacements only would be my advice to the new manager. There's plenty of valuable stuff down the back of the sofa, last years signings for a start.

Rumours are rife of course but we at the Musings have put Newsnow on 'ignore' and trust only declarations, with quotes from the horse's mouth. Sandro to Napoli; Eriksen to Utd; Siggy to Palace (fee agreed apparently) Paulinho to somebody or other in Italy.

You couldn't make it up except they probably just did. It's worse than tedious and kills all the excitement and anticipation of a new season. And there's another 6 weeks of this assuming they continue the nonsense of allowing transfers after the start of the season.

The World Cup passed without much incident as far as Spurs players were concerned. The highlights or lowlights if you prefer were the failure of referees to stop the targeting of Brazil's key player Neymar.

He was finally laid low with a broken bone in his back following one boisterous challenge too many. They said that they didn't want to spoil the spectacle by giving out too many yellow cards. Some false logic there if you ask me. I'd rather see the hackers out than the artists.

And the antics of Tim Krul in the penalty shoot-out against Costa Rica. If there isn't a rule against it there should be. Ungentlemanly conduct? Breach of human rights? Defiance of the Geneva Convention? There must be something.

But then I think that batsmen should walk if they know they're out. So what do I know about the modern world.  But that is exactly why I am and have always been a Tottenham fan.

Germany won it again, but I expect you know that. Deservedly on balance as a collection of individuals and as a team. I followed Argentina, honest Mauricio, after England and Spain went out

Messi is a very fine player and on balance I'd probably have him at Spurs, but player of the tournament I think not. Neymar was the man for me, a true creative. He had to be stopped and eventually was I'm afraid.

The beautiful game still exists somewhere in the Spurs DNA., whatever the evidence to the contrary. Which is one reason why I will be sad to see the departure of Siggy, if he goes. A player and a gentleman in the true Spurs mould.

Cultured but perhaps just a little fragile for the current turmoil of life. Bit like me really.

From that England squad I'd certainly take Cahill. The rest are too old, too fat, too obnoxious or just too plain overhyped and expensive.Yes that's you Mr. Rooney.

Jimmy's Video Spot:
Some top quality here as another contender for the no.10 spot spends most of his time on the left wing. We like the boy and if he goes this is a fitting  farewell. Eight minutes is a stretch only achieved by showing everything three times.