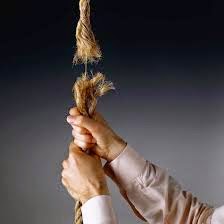 Step away from the scissors.
.
The JimmyG2 Column.
.

It's all gone a bit Buster Keaton at Spurs: hanging by our fingertips from skyscrapers; narrow misses from falling buildings, speeding cars and express trains. Isn't that better than Alice in Wonderland.

Our season: our ability to buy established players: our ability to keep the decent players we've got: ultimately our reputation are all going down to the wire along with Southampton and Liverpool.

Keep us hanging by a thread why don't you Spurs.This could all have been over one way or another weeks ago.  Four games to go and any of them could cut the cord and send us plunging down below. Well, out of Europe anyway.

The only difference is that for Buster it all comes right in the end whilst at best we'll finish sixth or seventh and do the poor man's tour of some of the more remote and lesser known parts of Europe. With any luck.

We fell from the Champions' League roof a while ago but we're still hanging on to the Europa Cup ledges for grim death. Southampton was the latest installment and as predicted by Musings it ended in a draw.

So the suspense goes on. Suspense! Sorry. Now there's good draws and bad draws and this was one of the better ones. We came from behind twice away from home to a team with a reputation for being a bit mean on their own ground.

You could also argue that we gifted them both their goals, a slip by Mason and then Davies dwelling on the ball and later misplacing a header to set up their second. But this was a draw written in the stars.

Only Bentaleb and Dier enhanced their reputations and Chadli confirmed that he at least knows where the goal is for the second week running with a well taken second equaliser.

Chadli's goal made us the first Premiership side to have three players with 10 or more goals. But conversely only 4 teams have conceded more.Think about it Mauricio.

Lamela in fine Argentinian Hand of God tradition steered one home to keep himself in the top echelon of our scorers and assisters. He and Maradona must have attended the same Buenos Aires coaching Academy.

Kane was well marked and starved of supply and Eriksen was his shy retiring off-field self but on the field for this one.  Mason flickered intermittently, Dier with two assists, playing out of position did well.

Vertonghen once again couldn't be bothered to play above the level of those around him and he plays as if waiting for a phone call to summon him elsewhere.

As soon as the dreaded words ' Pelle's in a lean spell at the moment' were uttered we knew exactly what was going to happen. He duly scored twice.

Not quite sure where Fazio had got to for the second. Is he in fact an upgrade on Michael Dawson whose heart and loyalty went some way to boost his averagibility. There are some things money can't buy.

And so the race for the UEFA continues. I use the word 'race' loosely. Although I remember fondly slow bicycle races from my schooldays and have a scar to prove it.

Liverpool are still delusionally talking of catching Man. Utd. Apparently they weren't going to do a Tottenham and waste the Suarez money. How did that go Brendan?

I love my European Thursday nights and finishing 6th would not only make Musings predictions correct but give more players the chance to play. Does it help them? Just ask PFA Young Payer of the year Harry Kane.

There are plenty of other young players on the edges of the squad who could benefit from playing in  the EUFA and give the first team squad, poor lambs, a breather at least in the early stages.

Not playing in it doesn't make top four any more likely in the near future so let's use it to our advantage. Bring some of the squad into the fold. Poor lambs: into the fold. Oh please yourselves.

In the meantime the inevitable Schneiderlin debate raises its head. Is he better than Mason or Benteleb? Does it  actually matter? He could play a defensive role neither of those two relish and would release them to play further  forward.

On Saturday he was certainly bested by Benteleb but perhaps not by Mason. He's a good player but it's not 'instead of', but 'as well as' if the asking price is reasonable. £20 million currently.

Jimmy's Video Spot.
Like Charlie Chaplin and Harold Lloyd usually the underdog. No stunt doubles, no safety harness. All his own work. Some of Spurs performances rival Buster for  breathtaking unpredictability and last minute escapes.

Are we there, yet? Hello! The season's denouement? ;)

Thanks Jimmy G for Buster Keaton...what a genius and so funny...as for our Spurs, well, I live in hope, still...what for, well, a trophy, Champions League again...some moments of magic...Harry Kane continuing his progress next season, Erik Lamela showing the magic he has, somewhere, some defensive acumen that means that our goalscorers aren't constantly trying to offset a deficit... :-)

I love the way Fazio is so well-placed to repel low crosses into the 6-yd box. He's exceptional in this regard. We should keep playing him til the end of the season (injuries make this likely) and give him a chance to come to terms with the premier league. I feel we will see him do much better, more consistently next season. Hope so, anyway.

No chance of 4th now, so all out for the EL. I love Spurs in Europe.

Enjoying your positivity fellas.
Should be an interesting summer but not too interesting I hope. Let's give Mauricio some space and a little backing Daniel