Pochettino and Machiavelli in agreement 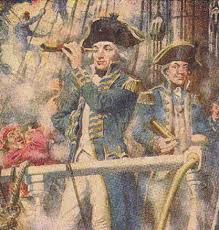 Nothing ahead to trouble us Mr. Hardy.
.
The Jimmy G2 Column.
.
Even with London derbies at either end and a 5000 mile round trip in the middle we still managed to emerge undefeated from another challenging week. But signs of fatigue and stress are beginning to show.

If the Europa fixture against Qarabag had actually been in the middle it might not have been so bad but a Thursday night at the extreme edge of Europe and a midday fixture on Sunday against a semi resurgent Chelsea was not what the doctor ordered.

Don't they have people somewhere to check these things. But if TV companies, who are paying the piper, say 'Jump' I suppose they meekly inquire 'how high?' These days  football is too often about the money.

Anyway All's Well that Doesn't End As Badly As It Might Have although but for a Lloris wonder save from Hazard we might all be in full conspiracy, misery mode. Infamy, infamy, why have they all got it infamy. ( Edit Courtesy Kenneth Williams  Estate)

We now sail into what looks like calmer waters before Xmas and into the New Year. With our new found steel and determination under the gaze of Mauricio 'no excuses' Pochettino we might just extract good value.

With West Brom, Newcastle, Southampton, Norwich, and Watford to play in December we should find ourselves handily placed for the challenges of 2016. 15 points is not impossible though unlikely. 11 seems more realistic.

And with our telescopes fixed firmly to our blind eyes, that is mine and Horatio's firm prediction.

We are not a team these days that gets complacent under the Head Coach's steely eye. We can top our Europa group with a home point against Monaco  having already qualified with the win at Qarabag for the next stage.

But beware the reefs that lie just below the surface in seemingly placid waters. After all the Titanic was unsinkable. And it wouldn't be the first time. But that was then.

The Qarabag game featured most of the first team squad and with little recovery time we looked to be flagging against Chelsea as a result.

Perhaps we will see more of the back up squad against Monaco although Mauricio's priority may be topping the group.

His game plan seems to be to take one game at a time and trust to the fitness and resilience of the squad. The future starts now and let tomorrow take care of itself when we get there.

Tommy Carroll played a lively 20 minutes in Outer Europe, Onomah never looks out of place and I would like to seem them both start in our final game of the group stage.

We set out to prove that we can be as dour and un-entertaining as the next man and did so without breaking sweat. Our build up was painfully slow but Pochettino, clearly a student of Machiavelli, will claim that the end justifies the means and a win is a win.

The Chelsea game was 90 minutes too far for some and I wouldn't have taken Kane or Dier on the trip. However as Harry scored you might argue that I got that wrong too. Armchair Manager left standing shock.

Mourinho claimed that this was Chelsea's best performance so far this season. Even so Begovich was the busier keeper and whilst they didn't exactly park the bus it seemed to have run out of petrol in a very inconvenient place

Dembele showed early but faded after a knock; Lamela made a late impression and Alderweireld played well; we missed Pundits Pet Alli but he'll be back.

Mason was lively and positive until he hobbled off but Lloris probably shades MOM for his one outstanding save, a couple of alert dashes to forestall trouble and some good punched clearances from crosses.

Such was the quality of the game that Diego Costa stole the headlines by throwing his toys out of the pram and his bib at Mourinho when dropped to the bench and not even sent on as a sub after eventually warming up..

So our record breaking unbeaten run continues. We peer over the very Rim of Achievement; knocking at the door of the ante-room to Football's Heavenly Treasures; waiting in the Express Lift to the Penthouse, on the cusp........

(Editor: Enough already Jimmy. That's more than enough to jinx us for the next decade. Jeeesus)

OK Chief but don't say I didn't foretell the impact of the Academy Boys under Mauricio. We just need to see it through now starting with the run into the New Year.

I will be very disappointed if we are not in the top four by the start of 2016. And you can quote me on that.

And remember you are tuned in to Spurs Musings. The blog that's not always wrong.

Jimmy's Video Spot.
Cesc Fabregas stars in this short video of his best moments in the Spurs v Chelsea game.
Whacking the ball into Willian's face from close up is my favourite bit though his free kick runs it close.

Er, very nicely put Jimmy G, but it's Kenneth Williams in Carry on ....Ceasar??, or does Frankie Howard's Estate own the rights to Carry On quotes?
I'm feeling v positive about the lads. Any thoughts/suggestions re January's transfer window?

Cannot believe it. It's almost fun being a Spurs fan again! Long may it last! COYS!

You are not wrong, thanks duly amended.
Yes. Leave well alone or promote another youth.
Steady as she goes.

Tiredness, injuries, suspensions, draws. Four terrible things that can scupper all our hopes and dreams up to the new year, despite (on paper) the chance to strengthen our PL position against 'weaker' opposition. Tiredness? .. because we're playing an energetic pressing and hard running 'push and move' game with the same players week after week, and often in the week. Great having a balanced 'team' at last (it really is) but we need top rate cover before we burn them all out. Injuries? .. many as a result of possible fatigue and playing Poch's high energy balls-busting tactics from game to game, as much as anything else. Mason brave but shaky, Bentaleb not back, ditto Chadli and Pritchard, Dembele shaky, and others exposed to problems too on the 'over-used' front. Suspensions? - a tougher Tottenham, but it comes at a price. Mostly it's the youngsters ..impressive and warrior like, but slightly reckless at times. Draws? Ironic that Palace are just behind us yet have lost 6 PL games, while we've only lost 1. I had a feeling that, along with tiredness from the Quarabag trip, there was a desperation to simply keep our unbeaten run going in the 2nd half against Chelsea. It is highly commendable to avoid defeat, especially against a still dangerous rival of ours, but draws aren't going to get us 4th let alone win us the PL. Spurs have to take risks, as well as stick to their long term plan. We've only won 6 PL games and we're into December! Monaco has got to be a complete experiment - keep all regulars free for the Sunday following. Then just hope that form and adrenalin get us to the new year in a strong position, when we can finally buy a striker to cover and sometimes complement/replace Kane, and a 'creative' but deep lying midfield playmaker. I love Mason's energy, but then I loved Holtby's too. Creative, he's not. Neither is Bentaleb. It took a long time to show that Bentaleb offered little to our team, and thank God Dier has made the slot his own. Mason and Bentaleb provide adequate cover and can improve, hopefully, so they're vital in that respect. Dembele is doing what we bought him for at last, but his close control of, and running with, the ball, belies a lack of creativity, or vision, too. Alli has it in him to be our 'playmaker' behind Eriksen, who is a little creative genius, but the Dane needs to be up the pitch assisting Kane and the wing play to be at his most effective. Having said all this, and being aware of these 4 pitfalls for our young team/squad, these are indeed exciting times, but we must fill in the last couple of pieces of the jigsaw (possibly too a left winger) and get the best cover where possible (while resting the odd key players for certain games).

uknown
How very Spursy...'Almost fun'. Let your hair down and enjoy.

c b waters.
Thanks for your considered response.
Interesting stats on Crystal Palace. Don't agree with all of it, rate Masons positivity higher than you. Remember Mason and Bentaleb were our midfield core.
last year. when we got 5th.
Agree about Dembele, Ali and Eriksen. Four bear traps filled with banana skins. Eek!

I thought it was a good point after the exertions of midweek and early KO. A Sky result. I am confident (esp as I don't have to prove it) we would have beaten them if put back to Monday as Fiorentina's and Napoli's games were in Italy.

We look good all over the pitch and when one key player goes out (eg Dier vs Liverpool and Alli vs Chelsea) someone else (Dembele and Mason, respectively) steps up without us looking inferior.

We look as good as anyone at present, including Man City, though maybe not Leicester. I, too, think we will be top 4 come New year, and don't tink we should stop there.

IKnowAlanGilzean
Interesting point about Fiorentina's and Napol'is games.
Yes its easier to slot in whether you are experienced or Academy when the team plays to a plan and a style.