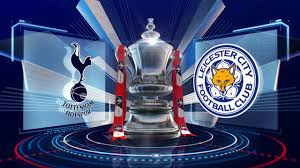 And Tottenham Hotspur will play Leicester City.
Might have been worse: away at the King Power stadium
.
The JimmyG2 Column
.
Poor conditions, poor refereeing, poor performance at W. Brom but 'No excuses' Pochettino' won't use the first two to explain the third.  Away from home we managed to sustain our unbeaten run but it should have been all three points.

Ahead early and in control we allowed W.Brom. to bully their way, under a lenient ref. back into the game and showed little of our new found steel to stop them.

In truth only Lloris turned up  and whilst others, Alli, Rose, Dembele and Lamela, had their moments this was not football apart from the first 15 minutes as we have come to understand and expect it.

Dier, Alderweireld and Vertonghen were all below par, unsettled by the wind, Rondon and each other's uncertainty. Harry was lost in a forest of defenders, Eriksen's flame flickered and went out; Dembele huffed and was eventually puffed..

Alderweireld found Alli ironically with a long ball which caught the W Brom defence in three minds and we were one up and coasting. Which might just have be part of the problem.

Let's enjoy our current Premiership Champions hype but don't start believing in it. Every point has to be hard earned and as we know to our cost at times there are no easy games in the Premiership.

Strugglers Newcastle beat another over-hyped Premiership outfit Liverpool; Chelsea lost at home to Bournemouth; Man.City were beaten by Stoke. The doors to the Premiership trophy cabinet have been left wide open.

Top of the league are Leicester who we play in the third round of the FA Cup. Perhaps we would both be happy concentrate on the league. This one can't ultimately end in a draw though and at least we start at home.

Which brings us neatly to our unbeaten league run. Our current twelve games overtakes the same achievement from over 30 years ago. Next up is the 22 game sequence from 1949.

Let's hope that beating that statistic doesn't become a priority or an obsession. Unbeaten runs may well give the boys that Invincibles feeling but winning is the habit we need to foster.

If we had lost to Chelsea and won at W:Brom in our last two games we would have been a point better off. You could go a whole season unbeaten and still get relegated. Just saying.

Ten points covers the top half of the table: six points the top five including us. It is close, very close and we must not miss out by timidity and failing to turn draws into wins

So let's not start parking the bus for fear of losing our unbeaten record. Lets not get defensive cautious or distracted To Dare etc.....You win nothing with best run statistics. It's points we need and what do points mean? Exactly.

Jimmy's Video Spot.
We haven't featured captain Hugo Lloris for a while So here is the latest video of his best saves. Get top four and he is almost certain to stay. Fail by even a single point and he will have plenty of offers.

Tx, for video clips, shows why he's the Boss! I still like us being in 5th, still under the radar, stay close, buzzing about, and then make a big push in the stretch run, no need to put any extra pressure on ourselves by being up there, just yet. Leicester will be facing that right now, see if they can cope. COYS!

It's so rare to read a balanced article about Spurs this season - the hype about the supposed miracle wrought by Pochettino on many sites has been as ridiculous as the 'mind the gap' rubbish of 2012 - why do so many fans have to put on the rose-tinted specs as soon as we go a few games without a defeat? Yes - no one (apart from Leicester) is remotely convincing so far this season, but all the draws are keeping us near the top four without actually breaking into it, and the aggressive football we're playing reminds me more of Arsenal's 1971 double team than our own '61 version - there's still a lot of improvement needed at WHL before I become convinced that our current 'coach' is the real deal, or that we can sustain a genuine challenge through to the business end of the season.

Ashley Collie.
Keep waiting for Leics to collapse perhaps we can help in the cup and then a week later in the league. Cup win would be a great psychological blow.

Cheshuntboy.
It's the nerves that we won't quite make it that have made me put my rose tinted specs away.
I like Poch.though he has brought some discipline and has a plan that the players have bought into. Realish deal at least.