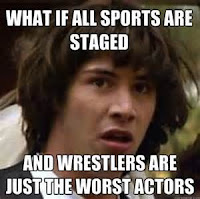 See it's not just me!
.
The JimmyG2 Column.
.
Conspiracy theorists assemble here in the shade of the grassy knoll.  Did we or did we not throw the game against Crystal Palace? A serious accusation I know but the evidence is clear.

Exhibit one: Kyle Walker tries to head into his own goal and Michel Vorm, as reserve keeper was clearly not in on the act and saves brilliantly. Belatedly Mauricio sends him a WhatsApp and he allows Kelly to score at his near post.

Exhibit two: Such is the team spirit that Danny Rose takes up the challenge and hits a dangerous crossfield ball which leads to their goal. A 'leave it to me Kyle, I've got this' moment

Exhibit three: To complete the plot we manage not to score. Son, Harry Kane, Onomah all contrive  to miss. But the real give away is Exhibit four: Deli Alli's  role in all this.

He quite deliberately hits the post having beaten Hennessy and makes the ball run along the line to the other post where it is cleared. Earlier he and Josh had declined the opportunity to open the scoring with headers from a corner.

Of those in the pitch at the time only Deli Alli has the necessary skill to carry out that manouevre as Eriksen was on the bench. The plot thickens and takes on the consistency of my Granny's gravy in which you could stand a spoon.

We fielded a weakened team but not enough to alert the FA though the sudden appearance of Nabil from out of nowhere raised a few eyebrows. Josh Onomah* who was not exactly tearing up trees completed the whole match.

Harry was clearly under instructions to use it as a warm up for the Europa on Thursday. The full backs were chosen for their tendency to brain freeze and both duly obliged.

Toby Alderweireld watched calmly from the bench alongside Hugo both clearly in on the plot. Eriksen came on and forgot the game plan and for 15 minutes made an impact until he got a message from Mauricio.

No professional footballer of Christian's abilities could waste so many corners unless there were an ulterior motive and bigger fish to fry. Not so much a fish as a  whale in the shape of the Premiership title itself.

Neither side wanted a draw and a replay so we cut our losses by not really giving it a go for the last half hour and went long which was ineffective and not really our style.

Why Mauricio decided to jettison the FA Cup and not the Europa is a mystery at this stage, but let's not make too hasty a judgement until Thursday's return leg against Fiorentina. We may end up dumping both.

In the first leg in Florence we secured an honourable draw and the away goal which might prove decisive. Nothing too obvious there. Although Mason as captain was odd after such a long lay off.

Yet another penalty award put away by Chadli spoilt any plans we may have had of losing it completely and we bossed the first half just to keep up appearances.

Alli was booked on the half hour and despite Mauricio leaving him out there he saw out the match despite constant Italian provocation. You would have thought the boy could have been relied on to get another yellow

Nice try Mr.P. They equalised from a deflection off Mason Ah! I see it all now, and we went a fraction to pieces but more or less recovered and held it more or less, together, more or less.

So plenty for the Kennedy Assassination crew to ponder. 'Bad day at the office' doesn't really go deep enough for me, or the feeble. 'it wasn't our day'.

I usually tend towards the cock-up theory of the universe but there's something very appealing about the conspiracy view in all this.

It helps relieve the pain of admitting we lost to an inferior team with an obnoxious Manager that we've already beaten twice this year . So the decks are cleared for a two pronged assault on the honours board

However if we go out on Thursday I will conclude that this was all a put up job and Levy has decreed that it's the Premiership title of bust. All our 'oefs' in one 'pannier' as Hugo might put it.

Jimmy's Video Spot.
To be fair to the boy I was glad he wasn't subbed. He's not quite Deli Alli but he has plenty of skills and strength and he is (all together) one of our own. Anyone that Mr. Pochettino likes is good enough for me.

Thanks Jimmy, I was beyond disappointed to go out of the FA Cup. I am looking for a big reaction vs Fiorentina. Cup games can take the pressure off the league I think, and keep the squad topped up.

IknowAlanGilzean.
You're welcome.
Too many games and too many good teams left to win the UEFA though I like the Champions' league connection for the winner.
League title it is.