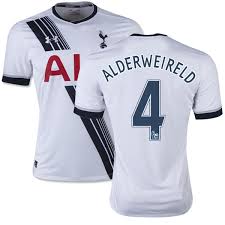 Count them revenue generating letters.
More than Son, Alli and Dier put together.
.
The Greg Meyer Column.
.
The Saturday After St Patrick's Day.
.
Spurs Brightest Star.
.
A majestic ball playing defender. A scorer of vital goals at crucial times. Powerful headers and sweetly timed rockets. A leader. A likeable personality with an instantly recognizable haircut.
.
Probably the longest name in the Premier League and certainly the most unpronounceable. Tobias Albertine Maurits Alderweireld was born in Antwerp 27 years ago.
.
He joined the Ajax youth academy as a 16 year old staying and developing until his exit to Atletico Madrid in September 2013.
.
It was during his time with Ajax that a lifelong friendship with Jan Vertonghen was born. Surely an early clue as to why he joined Spurs in July 2015.
.
He excelled at Ajax and chose Atletico but with some regular established centre backs already in place he found it hard to break through. A loan to Southampton transpired in September 2014. An option for Southampton to buy at season's end was to prove controversial.
.
Team Pochettino with its big connect with Spain had first hand, anecdotal and pure football gut feeling as to the qualities of Toby A. That knowledge only increased after his loan effected by  'The Team' now coaching at Southampton.
.
A successful season with the Saints meant them exercising the option to buy for 6.8 million pounds loomed. Either by sheer luck or perhaps the machinations of Daniel Levy (surely not) Atletico cancelled the option for 1.5 million pounds allowing them to sell to the highest bidder.
.
Enter a Spurs barrow laden with 11.5 million pounds. Even more unusual Spurs were doing major business at the start of the transfer window.
.
Team Pochettino striking quickly and brilliantly plugging a gaping Spurs defensive hole. Younes  Kaboul was on his way. No further comment required.
.
Apart from his rapport with Jan Vertonghen it was no coincidence Spurs were somewhat awash with a bunch of Belgian stars. Mousa Dembele and Nacer Chadli are no slouches. At least Moussa isn’t.
.
Toby brings numerous qualities apart from his tonsorial elegance. Something Deli Alli has put on record with Toby being the most attentive in the squad in that regard. Fluency in English is another useful quality.
.
Captain Hugo Lloris has stated his preference for the back squad to converse in English. Probably a great move given the likes of Danny Rose, Ben Davies, Kyle Walker and Ben Trippier are not known for their linguistic skills. Kevin Wimmer  speaks excellent English as does Eric Dier albeit fluent in Portuguese as well.(edit)
.
Certainly the lines of communication will be vital just like ….
.
At A Kent Pub near Westerham.
.
Most of Toby A. was on display against Dortmund at the Lane on Thursday night. Goal saving tackles were well in evidence mind the vital goal scoring was left in the locker room. Probably a bit much to ask for 5 vital goals in the one match to ensure Spurs advanced.
.
As well did we really want to advance. Most of our pub are comfortable with leaving Europe this season. The main game is ensuring we enter next season via the Champions League. Oh and the small matter of the title chase looms.
.
Bournemouth , thankfully at home. No mugs despite our 5-1 win at Dean Court. Again thankfully they are almost safe on 38 points. Relegation fears almost gone means perhaps not quite the same incentive. Spurs all the incentive in the world.
.
Some more magisterial defending and a vital goal would be welcome from our shining light Toby Alderweireld.
.
Cheers … yes we do have other shining lights .. hopefully they all turn up on Sunday …   Greg Meyer.      coys.
.
Jimmy's Video Spot.
It's either this short video with very irritating backing or a 4 minute tutorial on how to achieve a Toby haircut. Yes I thought so. So here it is. Player of the Season for most people.

Portuguese-speaking Eric must be pushing Toby for our POTY, both have been essential and a delight to watch. BTW, there's a photo of our minder Dier squaring up to Costa and one Yid over here tells this story: "Apparently Costa didn't realise Eric is fluent in Portuguese and made a dick of himself trying to give sly insults... Eric was having none of it and gave him such a filthy torrent of abuse in his own tongue he ignored him for the rest of the game. Not sure this is true..but, lets pretend it is!"