The Good; the Bad and the Ugly. 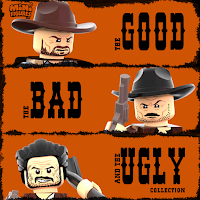 Clint Eriksen/ Christian Eastwood.
Well have you ever seen them together?
.
The JimmyG2 column.
.
.
Ugly win: beautiful three points.We took our chances and rode our luck. Fortune smiled upon us even if Michael Oliver did not. Apparently Leicester, a more than 'robust' team, didn't commit a foul until the 52nd. minute.

We won a game we perhaps could easily have lost but as we have found to our cost in the past if you create chances and don't take them you are doomed to fail. Doomed I tell you.Thank the Gods of Football, and Hugo Lloris and move on.

Leicester had more shots and more on target than us, more corners and more clear cut chances and the game centred on two penalty decisions: one given and saved and one not.

Son was booked for simulation following clear contact by Maguire. It's the perennial catch 22. Don't go down and you simply won't get the penalty. Go down and you might get a yellow. The over reaction to Son by Maguire was a clear diversionary tactic.

The other penalty saga after at worst a clumsy challenge by Jan on Maddison summed up Leicester's afternoon and led to a rare penalty save by Hugo. Maddison was primed to take it but he has already missed two this season.

Vardy ready to come on and pumped up with adrenaline and a sense of injustice after being left out of the starting line-up took over and put it well within Hugo's grasp who guessed right. Justice all round.

Two minutes later Eriksen who had already assisted Davison Sanchez' first goal for Spurs on half an hour scored a beauty from outside the area again following a lay-off by Llorente.  Game over on the hour.

Er.. well not quite Leicester were playing some good approach play and at last Vardy converted a chance. Pressing for the equaliser was their undoing. Sissoko swept a ball up the line to set the 'Simulation One' free and he sprinted away to score confidently.

Hugo was outstanding; Winks and Sissoko battled man and boyfully in midfield but Skipp was a little overwhelmed although his interception led to our second and vital goal. Leicester's new signing 21 yr.old Tielemans was a key player.

Game over; game on, game over. Three points to Spurs and we remain contenders at least in our own estimation. Another 'bottling' opportunity spurned. Is ''resilience' the new 'mental strength'?

Who needs our two key players Kane and Dele? Well we do for the run in and the Champions' League. But with Son buzzing and Christian Eriksen with 11 assists better than most even when he's not on song we are more than holding our own.

Spurs goals and assists this season.

(Courtesy of Carpediem991 and Spurs Community)

Sonny now has ten goals in 11 games. Eriksen in his five years with us leads the Premiership in goals from outside the area and we are joint leaders with Arsenal for the bookings for simulation trophy.(4)

We switch to the CL on Wednesday after a less than generous rest at 'home' in the first leg to Borussia Dortmund. I wouldn't be surprised if we won it, they are struggling with injuries and not in top form. There that's jinxed it.

So the Good was the result; the Ugly was the manner in which we achieved it and the Bad? Can't think of anything except referee Michael Oliver but three points is always the Path to Forgiveness..

Stadium. Mauricio hints that we might not play our first game at NWHL until next season. Cheesed off at the news?

Well apparently the famed 'Cheese Room Experience' was only a PR guff anyway. It's gonna get worse before it gets better. But you know that.

Jimmy's Video Spot.
Mauricio playing his cards cannily ahead of Borussia Dortmund. Dier, Moura, Foyth and Lamela probably all available and rested. Scrappy stuff from Spurs but 3 goals is a good return from this performance. Fourth win in a row.

It might be interesting to see a video of all the Michael Oliver che^H^H^Hmistakes from that game. I expect it would come to about the same length as the highlights. What a disgrace.

More than half of the chances Leicester had were due directly to those mistakes. It flattered them massively on the day. A very straightforward win with a fair ref.

Adrian Bell.
Looked for something re Michal Oliver but nothing on video. Usually don't mind him but certainly had an off day.Been criticised at different times by most clubs.
Shares mine and Jimmy Greaves' birthday so not all bad.

Tielemans, eh... I smell a rat here, Jimmy. There was some scuttlebutt that wse were "in" for the youngster, but MP ended up "disappointed" because signing anyone in January was "not possible". Yet we loan GKN to Monaco, and they loan Tielemans to farken Leicester? Tell me that doesn't stink. Tielemans looked exactly like the sort of player who would have bolstered our midfield.

@LBB.
I watched the game again and was impressed by him. I have a little quiet hope that we'll pick him up in the summer with an Alerweireld-type manoeuvre. He certainly showed he's worth a punt from what I saw.

@Jimmy.
Can't be all bad I suppose Jimmy ;-)
I came across a Twitter thread the other day when people were requested to describe him with a single word. Among all the body parts (mostly female anatomy) popped up a "Hot!!". The lady in question was obviously thinking outside the box (No pun intended). Why not? I was more shocked by the number of pundits that could look at the two main incidents of the game and, while none I've seen have agreed with him on both, a number have agreed with him on individual calls. Beggars belief for me. That'll be why VAR won't clear everything up. It will clearly be a whole lot better though.

Little Boxy Bird.
Yes very impressed.with the boy and he is young(21).Settled in very quickly
I'm not a conspiracy theorist myself, usually the world seems to be more a series of interlinked fuck ups.

Adrian Bell.
Oliver 'Hot?'Thinking outside the box! Like it.VAR might cause more problems than it solves, initially anyway.
I'm not 'exactly' a 'technophobe' more 'imprecisely'
Cheers both.