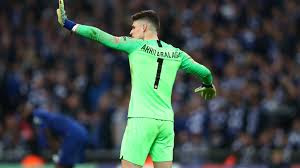 Come in Number One your time is up.*
What do you mean 'No'?

The JimmyG2 Column.
.
The no-draw run goes on. The certificate will be have pride of place in the NWHL trophy cabinet e if nothing else is won this season. And it is certainly looking slightly bleaker on the Premiership front.

The Champions' League is still on but that's for another week. Before then we have  some challenging games starting on Wednesday against Chelsea and Arsenal at the weekend in the Premiership.

It's all bubbling up nicely. Burnley was a bridge too far so let's hope the Bridge is not a bridge too far too. Burnley or some similar mishap was bound to happen. Since Wolves we have had four wins and a good performance and victory against Dortmund.

So we have had lots of chances to 'bottle' it and stared them all down. 'Losing' is not the same as 'bottling'. You didn't really think we were going to win every game did you. Nobody else does why should we.

But that doesn't mean we have to adopt and enhance the pundits and media agenda. They do the bottling story for money: what's Spur's fans excuse.

This was a collective failure and the blame should be fairly shared. Some were arguably worse than others but it's a team game. Aurier, Sissoko,Son, Eriksen and Foyth will bear the brunt of the brick-bats for tepid play or error strewn performances.

But apart from Harry Kane who else deserves the plaudits? With Harry back Son seemed to take the day off. Foyth and Aurier were apparently 'targeted' and didn't disappoint as they both seem to have a built in clanger or two in their basic make-up.

Again the build-up was painfully slow and though the wing backs got forward the final ball was poor. The last time Kyle Walker Peters played he made three assists so the fact that he is being ignored seems very strange.

Even Trippier might have had a point to prove against his old colleagues. and why was the more physical and robust Sanchez given the day off. So many questions and so few answers..

Both Foyth and Rose need to keep it simpler. They both overplay and ignore the obvious. Not a Cardinal Sin in the Grand Scheme it can be a positive fault but there's a time and a place for everything.

Saturday against an in form Burnley was neither the time nor the place.

Harry Kane started and played the whole game and his selection was at least justified by the goal and the brilliant save by Heaton from his shot from distance but he didn't do a lot else and seemed to throw our winning team out of joint.

But as in previous seasons we had won many games without him and we seemed to enjoy a collective away-day in every sense of the word. Sissoko reverted to his former self and was left on when Harry Winks was sacrificed.

Thereafter there was no control and little industry in midfield. Starting Foyth against the two Burnley Bruisers might have worked if Toby had been on his game. We were hesitant and failed to grab the game by the scruff of their neck.

So to put it bluntly we were poor and the subs and initial team were ill conceived. Mauricio obviously doesn't have the benefit of my 20/20 hindsight but he can be a very stubborn man.

This was at worst only a Mini-Meltdown, we dominated all the stats and both Eriksen and Lamela fluffed chances at the end and we won't be the only ones in the top six to falter before the end of the season.

With Man.Utd. and Liverpool drawing the damage is not  quite terminal. Liverpool were pretty poor and do not look obvious  Premiership winners, but we have a tough week in theory against Chelsea and Arsenal.

In fact the Oscar award for 'Best Bottlers' might yet go to Liverpool or even the England Rugby Union or cricket squads. There are signs that the press are cooling towards our success in this category as Liverpool come up increasingly short in the title race.

They were only being polite in pretending that we were in with a chance anyway and now they have much bigger fish to fry. As the man nearly said 'If you can keep your head when all about you are losing theirs and the press are blaming it on you'.

Chelsea's 120 minute saga in the Carabao Cup final might play into our hands too. An energy sapping and dispiriting loss to Man. City on penalties and a 'sensational bust up between Kepa Arrizabalaga and Sarri might give us an edge.

Neither the young keeper nor the Manager might be still in place by Wednesday which uncertainty might help to give us more focus than we showed at Burnley. A draw in both this week's games would not be disastrous in terms of the top four in any case.

Temporarily after the weekend 'alarums and excursions' the heat is directed elsewhere. Back in the cool shade under the radar again.

Stadium.
The word on the street is 'April'.

Trivial Pursuit Teaser.
Apart from Arrizabalaga what other word has 5 'A's in it. Answer next week. No prizes.

* You wouldn't get away with this on Mablethorpe's Boating Lake let alone at a Caraboa Cup Final at Wembley. A high power motor boat would soon tow you in.

Latest news
Mauricio charged by FA for confonting Dean after the Burnley game. He's already apologised so the only question is how big is the fine. Unless he pleads first offense or takes the 5th..

Jimmy's Video Spot.
Let's turn form the everyday inconsequential temporary trivialities of football and concentrate on the essentials of life and death. I know, I know football is much more important.

A longish and heartwarming post recovery interview with Glenn Hoddle. Feel the love.

For some reason this season 3-4-3 isn't working, we don't look comfortable playing it, Poch needs to go back to 4-2-3-1 now that Kane is back

"But that doesn't mean we have to adopt and enhance the pundits' and media agenda. They do the bottling story for money: what's Spurs' fans' excuse."
My apostrophes but otherwise perfectly put!!

Heybrigespur.
Not going to disagree with you. I'm sure there are good reasons for it but it certainly didn't work at Burnley.

Adrian Bell
Thanks. The bottling theory is an insult to Spurs. I notice in the press that Liverpool weren't 'bottlers'. They were 'tentative' and lost their way like Bo Peep's sheep.Chelsea didn't 'bottle' the penalty shootout they were distracted by the Kepa/ Sarri incident.Of course they were.

Whatever phrase anyone wants to use, it comes down to the same thing. When we get an opportunity to go one stage further, a point or two nearer, a cup final.....we seem to find a way not to take the opportunity. That has to change

Yes 'Unknown' - we may have improved in various ways under Pochettino's management, but winning when it REALLY matters isn't one of them, and we can't complain at the 'bottlers' label when there's so much evidence to support it - Juve in the CL and United in the FA Cup were very far from exceptions, and I remain to be convinced that many of our players aren't happier coasting in a 'nearly' team like Spurs than fighting for real success with the big boys - I'm still waiting to be proved wrong!

PS Liverpool were universally called 'bottlers' after they threw away a nailed-on PL title under Rodgers, but they've got a hell of a way to go to rival us - eight successive FA Cup semi-final defeats anyone?

Unknowns and Cheshuntboy.
Our history is there for everyone to see and cannot be denied.
I think we are arguing semantics here. Winning always matters as does playing well. 'Bottlers' implies that there is something in our DNA that prevents us winning titles and that it infects all players that come to the club.
Anyway I look forward optimistically and not backwards gloomily.But thanks both.

Sorry Mr G2, but even Pochettino seems to feel that the mentality of the players is the problem, judging from his reported comments after the Burnley game (unless he's been misunderstood/misquoted, as is always claimed when he deviates from the party line). I think his absurd over-reaction at the end of that match shows that he realises that the 'project' is running out of steam, and I'll be amazed if he's still here much after the original five years are up - how's that for some forward-looking gloom?

Cheshuntboy.
You forgot 'it lost something in translation' Don't think much if anything has changed. You are clutching at straws to support your past, present and future gloom. 3rd. and further progress in the CL still on. Do me for the moment

After tonight's debacle, I have to agree that straws are being clutched, but which of us is clutching harder is a moot point, Mr G2!

It's always easier to aim low. Higher targets take courage to aim for. The Stamford Bridge game hurts us all. Who has the b0ll0x to push on in spite of that? Who simply wants to take the easier road of criticising those who dare?
My congratulations to you Jimmy. You've always had what it takes to go the hard yards.