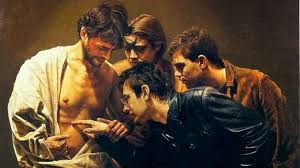 Doubting Thomas: an early Spurs celebrity fan.
.
The Jimmy G2 Column.
.
Doubting is the Spurs fans default position. But are you a secret Believer posing as a Doubter to avoid the grief that Liverpool, Arsenal, and Man.Utd fans get for their unjustified sense of entitlement.

I ask because even I the archetypal naive Happy Clapper seeing only angels and silver linings on the ghost train of life when devils, skeletons, and black clouds abound, even I would have settled for a draw before this one.

Mind you if we drew every game we would probably avoid relegation, most years anyway. I would certainly always take a draw against our nearest Premiership rivals but that doesn't really work for Cup games.

But that's a strategic choice and not a true example of doubting. Last night in the Champions' League Quarter Final first leg against City at the New Lane, Son and the stadium and the near capacity fans earned a late victory.

We deserved it for an energetic industrious team performance with the welcome return of the team press and despite losing Harry Kane on the hour to a probably season ending ankle injury.

Now some Spurs followers, I hesitate to say supporters or fans, theorize that we play better without Harry, and Sonny certainly scored the winner soon after he went off. But that's a theory in search of any clear statistical back up.

Harry is our Talisman; our Generator of Hope; our inspiration; our leading goalscorer; the four season phenomenon; the free gift that keeps on giving. But Spurs, without doubt, despite opinions to the contrary not least from Pep himself are not a one man team.

The team press was crucial in denying City the space in midfield to plot our downfall. Sane and De Bruyne were missing until the 88th. minute but that was less a product of arrogance than the pressure of balancing competing ambitions. I think.

Hugo saved an early Aguero penalty awarded by VAR for a doubtful Rose handball and had little to do for an hour. Trippier kept Raheem Sterling mainly at bay and Rose gave  Mahrez little scope.

The Belgians in the centre of defence made defending against the quadruple aspirants look easy and Harry Winks made a welcome return and was busy and effective. Sissoko these days is a  positive beast.

Dele went off with a wrist injury after another enterprising run out in the attacking third where I prefer him. His movement was excellent but the ball didn't quite run for him and he looked spent before he went off.

The goal resulted from a clever assist by Eriksen increasingly inspiring as the game progressed and the persistence and flair of Son who didn't give up a lost cause and while City's defence hesitated he rounded Delph and fired home under Ederson.

VAR confirmed that the ball hadn't gone out of play and the goal stood. We comfortably survived the last 12 minutes and six minutes of extra time, apart from Lloris holding on to a De Bryne cross under pressure he had little to do.

They dominated possession, passes and shots but Spurs roared on by their fans were rarely under real pressure. Two near capacity crowds, two wins and 2 clean sheets herald the new era and confront the doubters, for now anyway.

My friend Geoffrey is a doubter; hes actually an Extreme Doubter with awards to prove it. He doubts that Harry Kane will play again this season, or that we will make top four. Like this blog he's not always wrong. Just usually.

I don't usually give politicians the oxygen of publicity certainly none of the current batch but I can identify with the words of Tony Blair in this context.

“A day like today is not a day for soundbites, but I feel the hand of history upon our shoulder with respect to this,”


''When you doubt your power, you give power to your doubt'' (Honore de Balzac)
What he said. Believe.

Jimmy's Video Spot.
Full Highlights and all the goal .Usually foreign videos don't get taken down but the last one from the same source did, so here's hoping.

'He who baths first baths fastest', according to Mssrs Sellar and Yeatman, and I think it's probably best to wait until the plughole's finally stopped gurgling before starting to gloat. I like your friend Geoffrey, by the way.

Cheshuntboy.
Yes you and Geoffrey would get on well.
'Gloat' is a bit harsh,
Just the facts Ma'am,just the facts. Remember Dragnet and Joe Friday?

Tottenham on My Mind, Dear Mr Levy, JimmyG2 - I'm pretty sure we have the most eloquent fans who write. Ever!

As a confirmed non Winks fan, I dips me lid to the little fella for his best game in a long time. The rest of the season will see if there's any meat on the bones of the Better-Without-Kane theory...

Little Boxy Bird.
You obviously didn't get the Spurs Head Office Directive that Winksy was to be praised even when he doesn't play. Injuries might blight his progress but he's one of our own and I like him.
'Meat on the bones'.Like it.Hope so.Expect to see some squad depth testing against Huddersfield.

I remember Stan Freberg's 'St George' Dragnet parody, Mr G2, but the real thing was a little before my time (like the truly great days of Spurs, I'm sorry to say). On the subject of Spurs, I'd love us to finish the job against City, but it's one thing to beat Huddersfield; quite another to hold out for 90 minutes against the modern 'team of all the talents', and I just can't see us managing it. Top four will do for me, and that's far from a done deal. Love to Geoffrey, by the way.