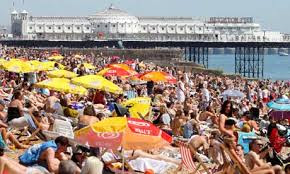 Brighton's inspiration for a packed defence.
Without the Pier and Umbrellas obviously.
.
The JimmyG2 Column.
.
What a bunch of teasers that Tottenham are. A 'must win' game, even Mauricio said so, and we win it in the 88th. minute. A game, mind you, that in the bad old bottling days we might have drawn or even lost.

Take a bow Christian Eriksen the only one that consistently probed and looked for openings. Danny Rose showed spirit and energy but  Eriksen showed his class in eventually breaking down a packed defence. Rumour is he might be staying.

Moura and Son denied the delights of the open road stalled and parked on the hard shoulder. Llorente without room to turn pulled in at the first lay-by. We were stuck in the narrow back streets of the Brighton defence.

This wasn't just a bus parking exercise it was more like one of those mothballed garages where old buses go to die and spare parts are ripped out to keep other buses on the road.

It wasn't all Bank holiday return to work snarl ups though. Dele and Moura had shots kicked off the line and Toby had one that hit the post and rolled back along the line. Ryan saved well from a Danny Rose dipping curving blaster.

Just as you were thinking 'well a point won't be too bad and might be a lifesaver for our friend Chris Hughton', Eriksen produced the goods and we were home and dry.

Four games at the New Stadium, four wins, eight goals scored and not a single goal conceded. What's not to like? Well not working out sooner how to overcome a packed defence and the referee's tolerance of time wasting.

These problems will only get worse as we become increasingly accepted into the elite and there are more teams not really able to compete properly in the Premiership for lack of resources and affordable talent.

They revert to bus parking, time wasting and keeping their fingers crossed whilst whistling a happy tune. It has worked before and nearly worked again.

In the end Eriksen who had been taking target practice all night got his sights focused and his rangefinder adjusted and scored from outside the area for the 21st. time since joining us, more than any other Premiership player.

Our build up was too slow, they were never going to be tempted out and we knew that; Trippier spurned numerous opportunities to cross so why play Llorente;  Dele worked hard but could find little space until the end game

It was a lonely night for Hugo Lloris often the only man in his own half. Wanyama not quite on his game after injury was careless at times and the appearance of Janssen the most warmly received event of the night until the goal.

Ironic of course but he might have been a better starting option than big Fernando or a replacement at half time when it was clear that the original plan wasn't working. You can't pick a lock with a battering ram.

29 shots on goal but only 5 on target tells a story and row Z patrons were in severe danger at times. Even one of Danny Rose's crosses caused them some consternation.

With Arsenal beaten again and Utd losing the Manchester derby we stand clear in 3rd. and our superior goal difference over all our rivals gives us an edge if we do slip up.Three more games, two at home. Ours to lose.

The focus is now on W. Ham who will be a more open proposition which may well suit Spurs approach better  though one eye will be kept on Ajax next week and team selection given the injuries might be problematical.

But this season Mauricio is used to strolling into the dressing room and shouting, 'First eleven fit men  to stand up and get their kit on, play. And so far it seems to be working.

All those theoretical problems about finishing 4th and Arsenal or Chelsea winning the Europa and stealing our CL place no longer apply. There are 5 places available in that event.

'There is nothing to fear but fear itself'.

The crucial moment is 10 minutes in. The rest is mainly speculative and disappointing.

Cue elation and despair once again. My two favourite players combine for a crucial strike by Christian Eriksen. Hits it well places it nicely and Roberta's your Auntie.

Eriksen and Dele in space as Brighton retreat too deep.
Well it worked for 88 minutes.

The sen of Erik has some form at late-match heroics, and the result was, of course, justified. Another nice piece, Sir Jimmy.

Belated comments on other matters:

1) The Walker handball was a stone-wall. Unlike the previous Rose version, Walker actually moved his arm deliberately into the ball's path; it's quite obvious from one angle. I never liked Walker and was happy to see him leave. He seemed to have a superiority complex and was frequently seen berating his team-mates. Perhaps he had conveniently forgotten his own many brain farts. Good rid.

2) The champions league second leg was bizarre. I doubt City can attack better than that, and on another day they could have had 10. Passing, positioning, pressing and first to every 50-50 ball. They were magnificent, and Son's two goals aside, I thought we were poor. Yet at the end we were dancing and they were despairing. I doubt I'll ever see a game like it.

Little Boxy Bird.
Yes Eriksen runs further and never stops so as teams tire he is always in with a shout.

Walker has not really hit th heights since joining City. He has a much more restricted role and usually stops and passes inside or backwards. Not entirely reliable but I liked the boy.But I'm a bit rose-spectacled about all our players, past and present as you know.

Nope we will never see the like of the City game again.
Thanks

LBB can perhaps say it without attracting the attentions of Captain Courageous, but we've been poor for most of the season, were poor against City and Brighton, and will probably be poor for whatever's left of 2018/19. We still might win the CL though - I remember being positively embarrassed by Forest's and Villa's undeserved European Cup Final victories against German teams in 1980 and '82, but their names still went onto the trophy, so who knows? We've stumbled over the line so often lately that perhaps the ultimate irony is on, a trophy for the worst Spurs team in Pochettino's five years at the helm. As usual, I'm not betting on it though.

Chehuntboy.
Goeffrey says Hi. Every silver lining has a cloud hidden within it.Now we might be embarrassed at winning THE trophy. and I'm the one that couldn't give a thingy about trophies
Never mind we might lose to Ajax and be overtaken by Arsenal in the run in and then you will be miserably justified and happy in your misery.
Agree though we haven't played that well but we must be doing something right.

Mr G2 - Please give Geoffrey my regards, and ask if he agrees that being right (mostly) isn't exclusively about personal gratification; sometimes it's just about objectively analysing a situation and judging the likeliest outcome. I don't expect all the lights to be green, or the roads to be clear when I'm driving, or my queue in Sainsburys to be the fastest, but perhaps the rose-tinted brigade carry their relentless optimism into all areas of life - it would explain some of the awful driving (of cars and supermarket trolleys) I regularly encounter if they do.

God love you, Chester -- a most eloquent curmudgeon. COYS!

Cheshuntboy
When were you last right?
Geoffrey thinks we will at best draw with W.Ham and asks why he always gets the supermarket trolley with the wobbly wheel.

Now that you ask, Mr G2, my record on elections, referenda and football matches could be better, but at least it explains why I expect the worst, and sooner or later encounter it. 1-1 today? Geoffrey's been on the waccy-baccy again - perhaps it explains his erratic progress down the household products aisle towards wine and spirits - wobbly wheel Pochettino's arse!

Well, I just knew Geoffrey was being wildly optimistic there - that'll teach him to stick to Ovaltine in future.

In times that could easily prove disappointing it's always fun to come here and read the comments.

So far we've been lucky with results elsewhere, but with barely a full team to choose from and 5 tough games in 15 days I suspect we should appreciate that there will be problems along the way.

I'd say if we can get through to the final of the ECL AND get in the comp next year too, we'll have done remarkably well considering all the setbacks we've had to push through.