Can we fix it? 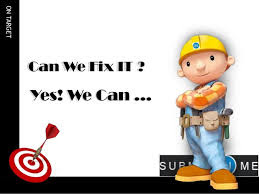 I'm with Bob
Fix it don't scrap it.
.
The JimmyG2 Column.
.
'Crisis? What crisis?' This crisis I'm afraid. It looks like stick or twist time after Brighton. The International break gives us a little breathing space and may delay any precipitate action by Levy or Mauricio.

I don't think he will either resign or be sacked. Who is available at short notice: Allegri, Mourinho, Chris Hughton, Allardyce, David Pleat again or Sherwood? But it doesn't solve the contract dilemma for key players or the fitness or out of form problems either.

Personally I don't want him to go immediately if at all. I want him to  stay and analyse and put things right with the team, the squad, the club and the fans. He is better placed to do so than any panic incomer and has credit in the bank

I would bench any that don't want to be with us and indicate so by their attitude on and off field and play by contrast those that clearly are still in love with the club including some youngsters.

And I include his own role in the current situation, if he can. But the weasel word ' immediately' indicates that at the end of the season unless fortunes and attitudes pick up then it might be best for all concerned for him to go.

There has always been a vociferous Anti-Enic minority and  a similar 'Levy-out' group. Now there is a loud 'Pochettino out' minority too but the fans and supporters don't get to decide these things.

The season is only 7 games in and we are 4 points off top four, radical change is uncalled for. Nobody is pretending that our form is good but there are many factors.

This latest defeat to Brighton means Tottenham, who were in the Champions' League final just four months ago, have taken 11 points from 24 so far this season and have failed to win in their last 10 away games in the Premier League.

This stretches back to a 2-1 victory at Fulham on 20 January. In total the club have lost 17 matches on the road in all competitions in 2019 - more than any other top-flight side. So a crisis of sorts without doubt.

Acknowledging the situation may be the first step to solving it but we are a long way off doing so. Despite a spirited rearguard action against Southampton and a lively half an hour against Bayern the last few games have been dreadful by any standard.

The results against Bayern, Colchester, and Brighton are a roll call of shame. Hugo's second crucial mistake this week on just two minutes in was a prelude to another  desperate display.

My father in law was an engineer and did all his own car maintenance.  His advice was always to fix one thing at a time to see if it cures the problem. If you try several things at once and don't check the results each time you will never know what the problem was.

Changing the Manager is drastic and sometimes it even works, like putting in a new engine. But it might be the clutch or the gearbox, or the electrical system or a faulty filter in the fuel system.

That was when you could get at the engine instead of just plugging it into a computer, and repairing things rather than replacing them. There were Car Maintenance Classes for Women then at the Local Tech. Probably illegal now.

Mrs Jimmy G2 went  for a term, obviously inherited her father's genes. Change the oil Mauricio and check the tyres.

Check out each of the players for their commitment and fitness; the ownership for its investment; the financial impact of the new Stadium; change the formation and the training regime and the tactics. Repair rather than replace the Manager and/or the players.

But not all at once. We need focused intelligent analysis. Knee jerk and you'll tip the oil can all over yourself.

There are many factors and changing managers may be throwing the baby out with the bath-water. Simply it is not a wise first step as it is irreversible and then we are probably back to the old days when Spurs Managers' average stay was 18 months.

We had 14 managers while Wenger was at Arsenal. So let's proceed with caution. I would bench anyone whose contracts are up or that have expressed an inclination to leave: play those that show commitment on the pitch and on the training ground.

Liverpool's powering start, City's loss and Utd,'s continuing woes have taken the tabloid and pundit  heat off us temporarily and we should use the lull to get down to an enquiry into our fall from grace.

It helps that Mauricio is no longer flavour of the month, though if this decline was a scheme to make him persona non grata at Utd. and Real it is case of cutting of our noses to spite our face and not a recommended game plan.

I note that there is no wild talk of Pep coming to Spurs after their indifferent start.  Remember he once said that the players stop listening to any manager after 3 years. He only overstayed his welcome only once, at Barcelona by a year.

My other team, Real Madrid, were in meltdown only a fortnight ago. Zidane was toast. Now they are clear league leaders and firing on nearly all cylinders in La Liga.

What doesn't kill you makes you stronger.Eventually.

Hugo Lloris.
Dislocated his elbow a particularly painful injury as we saw. GWS Hugo. But I don't expect to see him back much before Easter just in time to save us from relegation. I'm joking, I'm joking. I hope.

Next Up
Two weeks breathing space then Watford at home on Saturday 19th. at 3pm. I was thinking that playing away at Brighton would take some pressure of the boys as the natives are certainly getting restless, but apparently not.

Jimmy's Video Spot.
Brighton TV view of the game. Bit one-sided but so was the game. Lloris caght in at least three minds. Brighton played well, we did not.

Mercifully short highlights but I can't protect you forever with  speeches and restful music. Sorry.

I was as usual contemplating Spurs past recently, and realised that even Bill Nicholson pretty much shot his bolt in his first five years at the helm - one league title, two FA Cups and the ECWC before his fifth anniversary in October 1963, and only one trophy in the next eight years, the FA Cup again in 1967. We also only managed one serious title tilt in his last eleven years as manager (in 1967 again), and it proves to me that only the very greatest (SAF and Wenger) don't have a fairly brief use-by date, the rest - very much including Pochettino - having five years at most to achieve whatever they're going to at one club. Pochettino and the players look equally demoralised, and a parting of the ways seems inevitable, the sooner the better for me.

Cheshuntboy.
Just because its never been done doesn't mean it can't be done but I hear you.Testing times for all concerned.

Unusually for me, I wasn't paying enough attention to the past when I put SAF and Wenger on a pedestal by themselves (although they remain the undisputed kings of the PL era); Matt Busby was obviously on a par, Shankley built title-winning teams in different decades at Liverpool, and even the despised Don Revie kept Leeds at the very top of the old division one for ten years, but they were the exceptions, and even Brian Clough's magic only lasted a very few years at Derby and then Forest. Building two or more great teams at the same club is the mark of the truly great manager, and none of the current crop have managed the feat, or even attempted it, least of all Pochettino.

Cheshuntboy
Now's his chance.
I think Clough's record at Forest over 20 years is impressive.
My hero anyway as I lived in the area and saw Derby and Forest several times. Wife born locally and her village (Stretton near Burton on Trent where Nigel is currently manager) was Derby crazy in our courting days.

Clough was absolutely unique; all his teams were far, far greater than the sum of their parts, and his ability to turn sows' ears like O'Hare or Withe into silk purses was unrivalled. I had the misfortune to witness his Derby team demolishing Spurs in the all-too-memorable 5-3 FA Cup defeat at WHL in 1973, as well as the far less memorable defeat to Forest in the same competition a few years later (in what I seem to remember was his first game in charge), and I reckon he could have done wonders with this Spurs team a few years ago, before they all came to believe the hype about what a great team Pochettino had made them. Ranieri's transformation of Leicester in 2015/16 was the most Clough-like performance of the PL era, but we've already got our very own tinkerman, and much good it's doing us - oh well!