All Sorts Going On. 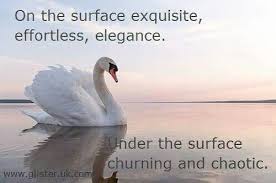 We just can't see it.
.
The JimmyG2Column.
.
Politics may be stuck in The Doldrums, an equatorial region of the Atlantic with calms, sudden storms, and light unpredictable winds but not football at Spurs.

Theresa set off in full sail and has ended up clinging to a rock for several days awaiting rescue by the DUP and survives because 'There is no alternative'. No such problem at White Hart Lane, New or Old.
.
Josh Onomah has been reborn as the new Dembele rediscovered at the Under 20 World Cup and CCV too; Edwards is still lurking in the wings; KWP is out there somewhere and Winks and Lamela will be like new signings.

Erik says 'Hi' and 'thanks' and with Son breaking his arm we wish them both speedy recoveries. As well as we did whether we would have done even better with Erik as an option last season seems a no brainer to me.

Transfer Window? What transfer window? Apparently some fans are floating the 'we need an older, experienced, winner'  boat but we got very close to the beach without him and the wrong man could capsize the craft.

Actually Sissoko is a storm warning of what can go seriously wrong in pursuit of this mythical beast. New players must fit into the crew and be able to row in unison. No Billy Big Rowlocks need apply.(Sorry)

Daniel has been seen recently on a flight to China: flogging Sissoko? Drumming up Sponsorship? Selling the club? Or brushing up on his famed Chow Mein recipe at the horse's mouth. Your call.

In a recently published player values article which I hope D.L hasn't seen, selling just half the team could almost pay for the New Stadium entirely. But then how would we then fulfill next seasons fixtures?

Dele tops the list at 155.000 million just ahead of HK. But Dier at 85 million and Gareth Bale at 59 million perhaps gives us pause for thought on the whole venture.

I wouldn't swap either of them for twice that but then that sort of decision is well above my pay grade especially as an unpaid blogger. The values are all according to some algorhithmic formula which doesn't surprise me at all.

The only player almost definitely possibly leaving is Kyle Walker maybe. But this rumour was started by Kierran so and may not be quite on the money. He would be a sad loss in many ways including football. City have offered loose change so far.

Harry Kane captained England and scored a last minute equaliser to save his side from the ultimate indignity: losing to Scotland. That boy is a phenomenal force of nature and worth every penny of the alleged 154 Million.

He put two past Hugo on Tuesday night in the France friendly too. I don't call that at all friendly but I expect they will laugh about it later. Varane was sent off for clipping our Dele and Kane put the penalty straight down the middle.

The fixtures are out and will need some studying in depth before I can conclude that the Computer has been nobbled again. At the moment the only observation I can safely make is that all teams play each other twice, home and away.

But as Eric Morecombe once said to Andre Previn: 'I'm playing all the right notes but not necessarily in the right order' We have an early chance to expunge the memory of that 5-1 defeat at Newcastle
in the opening fixture.

And then we 'welcome' Chelsea to Wembley in our first Home, sort of, game. No Doldrums round here. Next up holidays and clearing out the garage in no particular order.

So that was the week that was, just as long in football as in politics just seems longer in the latter.

Jimmy's Video Spot.
If this isn't the new Dembele my name is Michael Caine. Blew my bloody doors right off in the Under 20 World Cup. Needs to take this level of effort, strength and confidence into the full squad next season.

A big step up but you can see why Mauricio has been nurturing him.

Will we see Harry Winks and Josh starting a Premiership game together this season?
That would be another 50 million saved Mr.L.